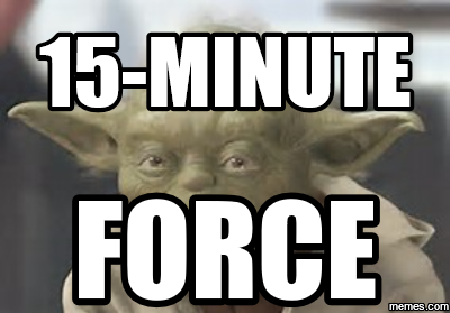 As this chapter of the 15-Minute Force opens, Anakin and Padme are being led to giant columns in the Geonosian arena to be chained up for execution alongside Obi-Wan Kenobi. Anakin tells Obi-Wan that they transmitted his message to Coruscant (while we notice Padme removing some sort of lock-picking tool from the waist of her pants to place in her mouth), but that they decided to come and rescue him.

Count Dooku and the Trade Federation knobs join the Geonosian leader on a balcony. The leader of the bug-people calls for the executions to begin.

A gate is raised and a giant beast steps into the arena. It has a ring in its nose the way bulls used to be depicted. It’s definitely an alien creature, but quite bull-like in its movements. I’m sure it has an official Lucasfilm-approved name, but I’ve decided to call it a Red-Headed Horn-Nose, because it has a red head and a horn on its nose.

Another creature enters the arena. It has crab-like characteristics, with a lot of teeth in its blue head, so I’m calling it the Crab-Bodied Bluetooth.

And a third creature. Tiger-striped, with a razorback ridge of porpupine-like quills and a wide mouth full of needle-sharp teeth. This one I’m calling the Wide-Mouthed Tiger-Quill Beast. Maybe just Wide-Mouth, for short.

Again, these aren’t official, trademarked names. Feel free to look those up.

“I have a bad feeling about this,” Anakin says after all three beasts are in the arena. You knew it was coming.

The Geonosians prod the beasts towards the chained prisoners. Padme uses the chains to climb on top of her column. Obi-Wan uses the Crab-Bodied Bluetooth’s sharp, stabbing claws (where all the good meat is located) to break his chains. Anakin hops on the back of the Red-Headed Horn-Nose, using the beast’s power to break his own chain free of the column. The Wide-Mouth begins climbing the column to get closer to Padme.

So, now it’s one beast to each prisoner.

Padme beats the Wide-Mouth with her own chain, getting a few bloody scratches across her back for her efforts. Obi-Wan rolls around in the dirt, avoiding getting stabbed by the Bluetooth Crab.

Meanwhile, Jango and Boba Fett have also appeared in Count Dooku’s luxury skybox. Jango is holding his helmet under his arm and looks unimpressed at the proceedings.

Anakin stays mounted on the back of the Red-Headed Horn-Nose for a little more than eight seconds, then falls off, getting dragged behind the creature by his chain. Padme uses her own chain to swing down and kick the Wide-Mouth Tiger-Quill beast, briefly taking it out of action. The Bluetooth Crab, still after Obi-Wan, knocks over a red column. Obi-Wan manages to wrest a spear from the hands of one of the Geonosians. Anakin breaks the spirit of the Red-Headed Horn-Nose, using his chain as reins. He uses the creature to attack the Wide-Mouth harrying Padme, who has had time to free herself from her chains. Then, Anakin tells Padme to jump down onto the Horn-Nose’s back with him. She does, then gives Anakin a quick peck on the cheek as they ride on.

Obi-Wan uses the stolen spear on the Bluetooth. It does little more than anger the creature. Then Obi-Wan joins Anakin and Padme on the back of the Red-Headed Horn-Nose. They seem to be doing quite well, considering this was meant to be their execution.

The Trade Federation douchebags are concerned, and want Count Dooku to have Jango Fett finish off the senator. Dooku counsels patience. She will die, he says.

Then the destroyer droids roll out and surround the two Jedi and the senator. It hardly seems a fair fight, although I assume most executions are inherently unfair. As we finish the first five minutes of this chapter, it would seem that our young heroes have met their end.

But wait…That’s not all…

Mace Windu and a Crayola assortment of Jedi make a sudden appearance, their lightsabers blazing to life. Windu has his purple lightsaber at Jango Fett’s throat while engaging in discourse with Count Dooku. Dooku tells Windu that he is brave but foolish. The Jedi are impossibly outnumbered.

Then the heavy battle droids come out shooting, and Jango—his helmet suddenly on—blasts Windu with his flamethrower. Windu leaps to the floor of the arena, his robe on fire. Right after, all of the Jedi are battling it out with the droid army. Both Obi-Wan and Anakin are given lightsabers to join in the fight.

The Jedi hold their own for a while. During the melee, we notice that the C-3PO head atop the droid body is unwittingly fighting on the droid side of the conflict, while the droid head on the C-3PO body isn’t being very effective. Padme commandeers a chariot, perhaps the same one that brought her and Anakin into the arena, and Anakin joins her, and they both fight droids while speeding around the arena.

Jango Fett prevents one of the Jedi from killing Count Dooku, then he joins the fray in the arena itself, squaring off against Mace Windu while Boba looks on from the shadows. Jango is trampled by the Red-Headed Horn-Nose, but he quickly regains his feet and shoots it dead. He doesn’t fare quite as well against Windu. His head is suddenly separated from his body by means of a purple lightsaber.

Anakin and Padme crash their chariot, but fight on, sharing a few quips.

Obi-Wan must once again face-off against the Bluetooth Crab monster. Now armed with a lightsaber, he dispatches it as easily as a selection from a seafood buffet.

R2-D2 steals a moment during the fracas to reattach C-3PO’s head to his own body.

A little over five minutes from the last time it appeared that All Was Lost, all appears to be lost again as the Jedi fall back from the sheer weight of droid numbers, collapsing into the center as the droids close in. Count Dooku orders the droids to cease firing and then gives Master Windu the opportunity to surrender. Predictably, Mace Windu refuses to surrender.

The Jedi are about to be wiped out, when, suddenly, our heroes are saved. Once again. Master Yoda has arrived with the newly legalized Army of the Republic. The clone soldiers who have arrived in their troopships are proceeding to kick massive butt. The cavalry that had arrived to save Obi-Wan, Anakin, and Senator Amidala is in turn saved by a cavalry of clone troopers and a tiny green Jedi.

This must be the attack of the clones we’ve been hearing about. As the Jedi hop onto the troopships, we have a moment where we see Boba Fett kneeling in shadow, holding his father’s helmet, which perhaps still contains his father’s head. Boba is sad.

As this chapter of the 15-Minute Force comes to an end, the Jedi and the clone troopers are meeting on the battlefield. In a war room somewhere, Dooku is meeting with the Trade Federation hacks and declines to send all of the droid army into battle; the Army of the Republic is too large. Then I find out that those large spheres I thought were buildings when Obi-Wan arrived on Geonosis are actually Trade Federation starships. The forces of the Republic are blowing them up now.

It would appear that the Battle of Geonosis has been all but won by the newly-formed Army of the Republic as this chapter ends.

We have one more chapter to go before we move on to Revenge of the Sith.

Until next time…It May Appear that All is Lost Every Five Minutes, But There’s Always Help on the Way. May the 15-Minute Force Be With You.