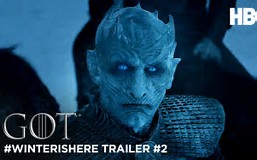 I waited until after the seventh season of Game of Thrones had finished airing before I watched it.

True confession time, here. Although I’ve been a fan of George R. R. Martin’s A Song of Ice and Fire, which began with the 1996 publication of A Game of Thrones, I still haven’t read A Dance with Dragons, published in 2011 and sitting on my bookshelf for that long. I read all four of the previous books in the series, and loved them, so I’m not sure why I’ve waited so long to read it. Martin still hasn’t finished the sixth book in the series and I may be the only GOT fan who isn’t upset about that. Rumor has it that only one more book will follow that one.

Martin is nearly 70 years old. I want him to live to be 106, as long as he’s healthy and happy. But, I also want him to live long enough to finish this series, which is completely selfish. James Oliver Rigney Jr, who was better known by his pen name Robert Jordan, passed away before he could finish writing his Wheel of Time series, which is another fantasy series I enjoyed. Someone else did their best to finish it, but it just wasn’t the same. That Rigney’s ashes are interred in the same South Carolina town where I have family still living is in no way a consolation.

The point I was attempting to make was that the fact that the HBO series was continuing past the current narrative of the novels didn’t really concern me overmuch, since it had already passed my reading. I didn’t really notice a difference in tone or character during this season. Everything still seems to make sense to me.

One thing I did notice, however, was the feeling that this wasn’t a complete season in itself. It was almost as if this were the first half of a season that will be completed by the eighth, and final, season. Maybe that’s just me, though.

Plenty of big things happen in season 7. It kicks off with Arya exacting her revenge on all of the male relatives of Walder Frey, killing them with poison at a banquet while she wears his face. It was a powerful, and satisfying, scene. Arya is easily one of my favorite characters in the series, both book and television.

Sam begins his study at the Citadel to become a maester, and, while there, finds an old manuscript that reveals the fact that Dragonstone sits atop a mountain of dragonglass. Not coincidentally, Daenerys and her army land at Dragonstone at the conclusion of the first episode. Sam eventually takes Gilly and Little Sam to return to Jon, but not before he cures Jonah Mormont of his grayscale.

Euron Greyjoy captures the Dornish women who poisoned Cersei’s daughter and also takes Yara hostage, taking them to Cersei to win her favor. Theon jumps overboard during the battle, but he lives, of course. Theon always lives.

Jon Snow and Daenerys finally meet on Dragonstone, though Jon initially refuses to bend the knee. During the course of the short season they develop mutual respect, and probably more. Jon gets his dragonglass; Daenerys eventually gets his oath of fealty.

Grey Worm and the Unsullied take Casterly Rock relatively unopposed, but this was a strategic move on Jaime’s part. Meanwhile, Jaime has led an army to take Highgarden and destroy House Tyrell. Jaime allows Lady Tyrell to take poison to end her own life, and she confesses to killing Joffrey before she dies. On the way back from Highgarden, Daenerys and her army attack Jaime’s army. She nearly kills Jaime, who is saved by Bron, but her dragon is wounded by one of those giant crossbow things, proving that the dragons aren’t invulnerable. Randyll Tarly and his son Dickon—Sam’s father and brother—refuse to join Daenerys’ army after the battle and she has the dragon burn them alive.

Bran returns to Winterfell and is reunited with Sansa, and later Arya. Bran is one weird guy now that he’s the Three-Eyed Raven, who, like Dr. Manhattan in Watchmen, can see past, present and future events, which makes him not entirely present in the moment and, like I said, just weird. Littlefinger continues to do his thing, trying to influence events through whispers and lies. It seems to be working with Sansa, until suddenly it doesn’t, and Littlefinger is put on trial. Arya carries out the judgment, so you can guess what that is.

Jon travels to the Wall along with the Hound and other prisoners of the Night’s Watch to capture a wight, which they think will prove to Cersei that the world is in danger from the army of the Night King. They are successful in their mission but not before a great battle with the army of the dead, and not before one of Daenerys’s dragons is actually killed by the Night King. They take the wight to a tense meeting with Cersei, who seems to take up their cause after a few words in secret from Tyrion. Of course, Cersei is being duplicitious, but that’s just Cersei.

I liked Season 7. I thought it was too short, but that’s been true of every season so far. I’m sure it will be true of the last season as well.