On television, it is popular to characterize nerds as people who dedicate too much time to minutiae. I haven’t watched Big Bang Theory in a couple of seasons, but I remember that Sheldon hosted a web series about flags. And on The Middle (a show I still watch, which is completing its final season this year), the youngest child Brick is obsessed with typeface fonts.

I am a self-professed nerd, and I admit to my own obsessive interests about things that may not matter to the majority of people, but none of these has ever been fonts (or flags, for that matter). Words and phrases, yes, but not necessarily the fonts they are written in.

Okay, I will admit that I do have a preference for Comic Sans MS in the stuff I post here. It’s nice and readable on-line, and since this is a nerd-centric blog, the comic book connection is apt. When I’m writing fiction, I typically use Times New Roman because it looks appropriate on the printed page to me. More official, somehow. So, I guess I do think about fonts, at least a little. But, I’m not obsessed like Brick Heck. I’m not (he doth protest, perhaps too much).

However, as soon as I saw the logo for the Netflix series Stranger Things, way back before the first season premiered, I noticed something about the font. The logo made me certain that the show would be a Stephen King rip-off before I even knew what it was about. This same font was used for the book covers of the novels King published in the ’80s. There was also a King novel from the early ’90s titled Needful Things. And it’s not a big leap from Stranger Things to Stephen King. 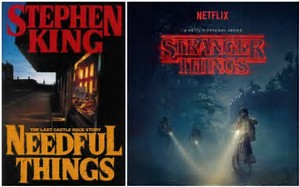 The word “rip-off” is a bit harsh, I’ll admit. The show is an homage to King, just as it is an homage to Steven Spielberg and all things ’80s. And I love the series, now two seasons in. But, I wasn’t wrong about the font’s ties to King.

The typeface is ITC Benguiat, which was designed by Ed Benguiat and released by the International Typeface Corporation (ITC) in 1977. And while it was used on Stephen King book covers, it was used on other things as well. The typeface was used on the covers of the Choose Your Own Adventure children’s book series.

And on the album cover of The Smiths’ album Strangeways, Here We Come. 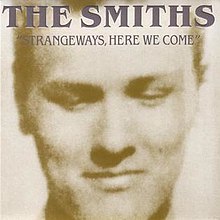 And in many other places, such as the logos for both the National Assembly of Quebec and the Melbourne Knights, the main title sequences of a couple of later Star Trek movies, Paramount’s FBI warning since 1995, and so on. It has been a popular typeface font and is not owned by Stephen King.

Ed Benguiat, the typeface’s creator, is somewhat of a rock star in the world of typographers. He just turned 90 last month. He began as a jazz percussionist, and once said in an interview that he considered himself a musician first. He became an illustrator because he saw himself becoming one of those old musicians playing bar mitzvahs and Greek weddings.

Benguiat has crafted more than 600 typeface designs in his long career, in addition to the eponymous ITC Benguiat. Among these are Tiffany, Bookman, and Edwardian Script. You would recognize them if you saw them. They’re not included with my OpenOffice program. He is also known for his designs or redesigns of the logotypes for Esquire, The New York Times, Playboy, Reader’s Digest, Coke, Ford, and many others. Also the logotypes for the original Planet of the Apes, The Guns of Navarone, and, my personal favorite, Super Fly.

Not bad for a jazz percussionist.

In closing, even though an obsession over typeface fonts isn’t really a part of my particular brand of nerd-dom, I did enjoy this quick peek behind the curtain. And I’m here to publicly praise Ed Benguiat.