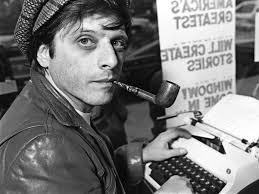 I watched the documentary Dreams with Sharp Teeth (2008) way back in 2010, and even wrote a review of it that I posted on Netflix. I’m going to repeat that review in its entirety here, but then will elaborate further on the man and author, and my own personal experience with his work.

Without further ado, my review, circa May 2010:

I don’t care for Harlan Ellison, the man. He’s an egotistical, condescending, self-righteous ogre of a human being with a hair-trigger temper. And, you get that in DREAMS WITH SHARP TEETH. You will finish this documentary with an in-depth understanding of the things that make Ellison a sorry excuse for a man. I also love Harlan Ellison, the writer. What makes me sad is that this documentary may not make you want to go out and read Ellison’s books. And that’s a shame, because the man writes like a hot-rodding angel. Maybe some of this will shine through for you when other writers such as Dan Simmons and Neil Gaiman are interviewed about Ellison. The respect that these authors feel for the man is genuine, and obvious. Robin Williams is another friend of the man, and their mutual affection also seems real. I don’t regret watching this DVD, and I do recommend it. But, only as a companion to any collection of his short stories. Read the man before you judge him.

I stand by this review, even with what I hope was unintentional plagiarism. The phrase “writes like a hot-rodding angel” was how Stephen King described the writer Dan Simmons. Since I mentioned Simmons immediately after stealing the words, I want to assume that my 2010 self meant to give proper attribution at the time. That I didn’t bothers Present-Me. Maybe Past-Me was an asshole. At any rate, if writing the same review today, I would point out how apt “writes like a hot-rodding angel” is in describing the work of Harlan Ellison, a brillaint, unlikeable person whose inner beauty shines best on the page.

I would also point out how poignant the appearance of Robin Williams was in this documentary. The two were truly friends, and Ellison was quoted after Williams’ suicide as saying “the last few years have been gray and oppressive in many ways for him. I think Robin wanted out for some time.” This is a sad coda to the documentary now.

I was a poor kid with a library card and a voracious reading habit when I discovered Harlan Ellison. These were the days before video games, music, movies and other diversions (such as—er-hem!–girls) lifted my nose out of books and got me interested in other things. At the time, I do believe I was making an attempt to read everything that had ever been published as if that were a realistic goal.

During this quixotic mission, I was repeatedly drawn to mystery fiction, science fiction, and generally fiction of the “weird,” such as dark fantasy and horror. I assembled a stable of favorite authors, most of whom remain favorites to this day.

Harlan Ellison was one of these. Both of the science fiction anthologies Dangerous Visions (1967) and Again, Dangerous Visions (1972) could be found in the stacks at Lancaster County Public Library when I was a kid. These works may have been my first exposure to Ellison, who served as editor and anthologist on both volumes. I have no memory at all of ever having read any of his published novels. But, I can attest to the fact that he shines in the short form, in both short stories and his nonfiction. I’ve read several of his short story collections. The collection Shatterday features the wonderful story “Jeffty is Five” among others. Stalking the Nightmare, even though it was largely a rehash of older Ellison works, probably inspired me to write as much as anything I had read before or since. I still think about some of the pieces in this book 35 years later. Stephen King—you know, the guy whose words I plagiarized earlier—also wrote an introduction in Stalking that all but raise Ellison to sainthood (or perhaps whatever the demonic version of sainthood may be).

Isaac Asimov, one of my favorite Golden Age science fiction authors, used a thinly-disguised version of Harlan Ellison as the protoganist in his mystery novel Murder at the ABA. This only added to the Ellison mystique. There was an old story about how Ellison first met Asimov (at a convention, I believe) and went out of his way to insult the older writer. I can’t seem to find the anecdote on the Internet now, but I remember reading the story, even if it is apocryphal. At any rate, the two later became friends, even though Asimov was quick to point out that Ellison was actually 5’2” rather than the 5’5” he claimed.

Concerning Asimov, Harlan Ellison wrote a screenplay for Asimov’s I, Robot that I wish had been shot rather than the god-awful Will Smith vehicle. I have the hardbound edition of the screenplay in my library, and I am happy in the knowledge that it will continue to exist long after the movie has faded from our collective memory. (Don’t get me wrong: I actually like Will Smith. He just needs to stay away from the properties that helped define my childhood, such as I, Robot, I Am Legend, and Wild Wild West.)

Ellison also wrote one of my favorite episodes of the original Star Trek, “The City on the Edge of Forever.” Ellison loudly and frequently criticized Gene Roddenberry and the other writers who made changes to Ellison’s original script, and tried to distance himself from the final product. I read the original teleplay after it was published in book form in 1995, and have to agree with the author that it was a much better, more nuanced version of the story. However, it could never have been shot on the budget that Trek was working with in those days. I stand by my original opinion of the episode, and it remains one of my favorites. The teleplay adds to it rather than subtracts from it.

Harlan Ellison has an apparently deserved reputation of being a not very pleasant person to be around always. As I wrote in my review, I did not care for him, as a person, after watching the documentary. But, Boy Howdy, the man can write.

I’m writing about him now because the man’s 83 years old, and, even though he may outlive me, I wanted to write something about him while we are both still alive. Even if I don’t like him, I’m still a fan.

One thought on “Dreams with Sharp Teeth: a documentary review (with additional commentary about Harlan Ellison)”