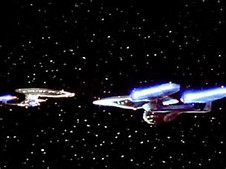 “Yesterday’s Enterprise” is a TNG third season episode that deserves honorable mention. It is the first episode of that series that I rated as high as 4-stars (out of 5) since Season 2’s “The Measure of a Man,” which earned all 5 stars from me. On my personal rating scale, 4 stars means “very good,” while 5 stars means “damned-near perfect.” I have little doubt that this episode will rank fairly high on my list of all-time favorite Trek episodes once my Boldly Going project is completed.

It is another time travel/alternate history episode, and I seem to have a predilection for episodes of this type. But, not all of them rank as highly as this one for me. I’m not alone in my high opinion of this episode, I know. Here’s why I like it so much.

Tasha Yar was never one of my favorite characters. In fact, I was—perhaps not so secretly—glad she was killed off during the first season of TNG. I know Denise Crosby asked to be written out of the show because she wasn’t any happier with her character than I was. However, her character’s death in “Skin of Evil” always seemed senseless, completely without meaning. It didn’t even increase the likelihood that others in the main cast could be similarly killed off since it was common knowledge that this was Ms. Crosby’s decision. By bringing Tasha Yar back to life in the alternate history created by the Enterprise-C’s randomly un-random appearance through a temporal space MacGuffin, directly in front of the Enterprise-D, some 22 years out of its own time, the series was able to right a writing wrong from the first season. Tasha Yar would be able to leave the series with a meaningful, heroic death.

This would have repercussions, but more on that later.

The premise of the episode is that the Enterprise-C traveled through time during a critical battle with Romulan warbirds, while responding to a distress call from Klingon base Narendra III. The Enterprise-C is in bad shape when it appears through the temporal rift, moments away from destruction. But, the ship’s disappearance from its own timeline results in the destruction of a Klingon outpost and a war with the Klingons that has raged for 20 years. The current timeline of Enterprise-D is altered by this change as well. Starfleet is at war and not doing well. Tasha Yar never died and is at the station where we were accustomed to seeing Worf, who, presumably, is fighting on the Klingons’ side. It is a darker Enterprise we see in this episode, with no children or families on board, a vessel of war instead of peace.

And only Guinan is aware that things aren’t correct.

I liked this touch. Guinan always had this wise, otherworldly, Oracle-like vibe about her character, and it shines through in this episode more so than in any previous one. It is Guinan who convinces Picard that he must send the Enterprise-C back through the rift, to the entire crew’s certain deaths, in order to prevent the 40 billion deaths that have occurred since the beginning of the war. The crew of the older ship willingly return to the battle in their own time, and this time Tasha Yar joins them. She learned, through Guinan, that she was supposed to have been dead in their timeline, and her death had lacked meaning. She would rather have a hero’s death as well.

I thought this was a genius move. Yar’s sudden death by the black oilslick monster was just one of many examples of bad writing from the first season. This episode showed that the series was now in much better creative hands. I wish this new and improved writer’s room had had time to fix every episode from the first season that sucked.

This episode made me respect Tasha Yar. I still didn’t like her, but at least she gets my respect.

Also, a postscript bonus, it’s mentioned that the Enterprise is on its way to Archer IV at the end of the episode.  Later, in Star Trek: Enterprise, this was the first M-class planet visited by the Enterprise NX-01 and was named for Captain Jonathan Archer.  I love this kind of continuity.