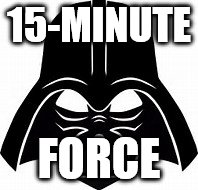 Chapter Nine of the Rogue Edition of the 15-Minute Force isn’t even 15 minutes in length. But, the movie isn’t over yet as the chapter opens.

To recap: many of our Rogue One players have already died, including Chirrut Imwe, Baze Malbus, and K-2SO. Imperial Director Orson Krennic is lying, shot, atop the Citadel Tower, but somehow I don’t think he’s down for the count yet. Captain Cassian Andor and everyone’s favorite Rogue One Rebel, Jyn Erso, are embracing each other after successfully completing their mission to transmit the Death Star plans—from Galen Erso’s cleverly hidden “Stardust” data file—to the Rebel Alliance ship overhead commanded by Admiral Raddus. This is a moment of victory.

Admiral Raddus’ assistant tells him that a massive object has just come out of hyperspace. It is the Death Star.

On the Death Star, Grand Moff Tarkin orders his space station soldiers to target the base at Scarif. Lord Vader will take care of the Rebel fleet.

Jyn and Cassian get into an elevator and look longingly into each other’s eyes.

Director Krennic raises his head and sees the Death Star overhead. See, he wasn’t dead yet.

Grand Moff Tarkin says, “You may fire when ready.”

A scene with intercut images of the Death Star’s ignition sequence, looking familiar, of Krennic seeing his impending doom, of Jyn and Cassian moving slowly through some lower level of the Tower.

Then, the Death Star fires. The top of Citadel Tower is sheared off. There goes Krennic. But, the mushroom cloud begins some distance away.

Admiral Raddus says, “Rogue One, may the Force be with you,” as he watches the explosion from space, and then he orders the fleet to begin preparations for the jump to hyperspace.

Darth Vader’s Star Destroyer, Devastator, drops out of hyperspace before the fleet can leave.

Jyn and Cassian walk to the water and then sit down on the beach, holding hands, as they watch the fireball expanded in their direction. They are going to die and they know it. Cassian tells Jyn that her father would be proud of her.

One of Vader’s minions in the silly little gray hats tells him that the Rebel flagship has been disabled, but that they received a transmission from the surface just before the Death Star fired upon Scarif. Vader tells his underling to prepare a boarding party.

Jyn and Cassian embrace like lovers as the fireball approaches the beach. There is a merciful cut so that we don’t have to see our young heroes disintegrated in the blast. But, they were. Disintegrated, I mean. They are allowed to live on in your fan-fiction, however.

Vader appears on the Rebel ship and begins slicing and dicing his way through Rebel soldiers as if they were the Tusken Raiders who killed his mother, the Virgin Shmee (who probably wasn’t a virgin after she married that moisture farmer guy, any more than Mary remained a virgin after Jesus was born, right?). The Rebels manage to pass a copy of the Death Star plans forward, ahead of the slaughter. Then we see several of them escape, with the plans, in that same ship we saw at the beginning of Star Wars (which you may call A New Hope if you wish, even though that wasn’t its name when I first saw it). As Darth Vader watches the ship leaving from the belly of the Rebel flagship, we know that he will be hot on its heels. We’ve already seen that happen, way back in ’77. At least we OG Star Wars fans did.

Just before the ship makes the jump into hyperspace, the plans are given to Princess Leia Organa. The young Leia, which is doubly bittersweet since Carrie Fisher passed away not long ago.

Afterwards, the credits begin to roll. For eight minutes.

At least we get full-bore John Williams music in the credits. George Lucas is acknowledged towards the beginning of the credits, but only because he created this universe, not because he had anything to do with this film. Rogue One may have that musty smell of Kyber crystals, but it doesn’t stink of midichlorians.

So, what did we think about the movie?

I liked it. Quite a lot. It felt like Star Wars, even while it differentiated itself, eschewing the opening crawl and the familiar Star Wars wipe cuts. The characters all seemed to inhabit a moral gray area, rather than being just pure good or bad. Of course, one could argue that moral gray was the same area you’d find Han Solo and Lando Calrissian as well, so that’s not entirely new. Maybe even Luke, at least by the time Return of the Jedi came out and he was dressing all in black and Force-choking people. The Empire still seemed to be Evil, of course, but the Rebels no longer seemed so Good, if that makes any sense. There were plenty of Star Wars tropes to keep us veterans happy, while still managing to seem like a fresh story.

I have to take away some points for the ending, though. There was a time, back in the 1970s especially, when it seemed that the popular thing to do was to kill off your main characters at the end of the film. I’m thinking Silent Running, Vanishing Point, Butch Cassidy and the Sundance Kid, Bonnie and Clyde, and Easy Rider, but know I could come up with dozens of others if I tried, from every decade. Star Wars did this to a degree at the end of Return of the Jedi, if you consider Anakin Skywalker to be the main character in the saga (I sort of do, at least a little), but otherwise this hasn’t really been a Star Wars thing. Yeah, I know about Han Solo, too, but that’s still in the future. And whoever might have happened to die during The Last Jedi (I’m not spoiling that one yet).

So, while this sort of ending has plenty of precedent, and it seems a little inevitable the way the story is written, I still didn’t like it. In fact, I think it sucked. In this otherwise terrific one-off, we managed to introduce a cast of interesting characters, and then we killed them all off. The message sent is clear, and make no mistake about it, it was a threat: Under the control of Disney, no one is safe. While this is exciting in some ways, it doesn’t make me feel any better about the ending I just watched. I would have been willing to watch at least one more movie with the Rogue One squad.

That’s not possible. They are all dead. And I’m no closer to understanding what’s up with Mon Mothma’s comment about the Bothans. Or, at least I wasn’t, until I looked it up on the Internet. You see, Mon Mothma never said anything about Bothans in the ’77 movie, which this one was a prequel to. She made that comment about the 2nd Death Star, in Return of the Jedi. Which implies that there is another fatalistic story to tell out there in the Star Wars universe. Rogue Two: Many Bothans, maybe.

We will begin our next edition with the one that started it all. The one which, since 1981, has been known as Star Wars: A New Hope. I’m genuinely happy to be watching it again, although I know it will be a different experience for me since I just watched the prequels and this movie. Will it still hold up? Will I still love it? We’ll see.

Until then. . .Remember: Many Bothans Died to Bring You This Blog. . .and May the 15-Minute Force Be With You. Always.

One thought on “Rogue One: a Star Wars story (a 15-Minute Force production): Chapter Nine: The Ending Kinda Sucks (or: Here’s the Deal with the Bothans)”