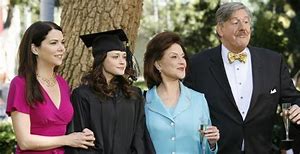 There’s a great deal of hate for the last season of Gilmore Girls. I stumbled upon that by accident, and it puzzled me at first. Then I found out that this was mainly due to the fact that creators Amy Sherman-Palladino and Dan Palladino were no longer a part of the series because Warner Bros chose not to renew their contracts. This angered the diehard fans while the series was still on the air, and this displeasure was taken out on the season as a whole.

I watched the entire series many years after the last episode aired, so I had no idea about the backstage drama that was going on during filming. This seemed like just another season of the show to me. There were things I liked, and some I didn’t. Maybe some of the things I didn’t like were a result of the Palladino departure. I really couldn’t say. But, taken as a whole, I enjoyed the final season of Gilmore Girls.

Let’s start with something I didn’t like a lot. Lorelai marries Christopher, Rory’s father, while they are vacationing in Paris. I’ve never been a big fan of Christopher anyway, and I despised the way Lorelai and Luke split (while the Palladino’s were still in charge, I might add), but the entire marriage—Lorelai’s first—seemed wrong from the outset. Add to that fact that Rory wasn’t in attendance, and it seems doubly wrong. That doesn’t seem to jibe with what we’ve learned about Lorelai and Rory’s relationship over six seasons.

There were also parts of Rory’s relationship with Logan that I didn’t care for. I feel that Logan was inconsistently written. At times, he comes off as smart and sincere, and honestly in love with Rory. Then, he’s suddenly the entitled rich brat again. As has been true this entire series, the course of romantic relationships never quite go smoothly, and Rory’s relationship with Logan is predictably on-again/off-again until he asks her to marry him and she gives him her final answer.

Lane Kim and Sookie Jackson are both pregnant this season. Lane, for the first time, and after having sex only one time on her honeymoon with Zach (a little contrived, but it happens, I’m sure), and she has twins before the finale. Sookie is having her third child, after Jackson failed to get his mandated vasectomy and then didn’t tell her (a lot contrived, and I question that Sookie wouldn’t have known that Jackson lied). I don’t list the pregnancies as something I didn’t like. This series was largely about motherhood after all. With all the baby buzz, I’m just happy that Lorelai, Rory or Paris Geller didn’t end up pregnant as well.

Lorelai’s estrangement from Luke was also troublesome through most of the season. Again, this was a product of the previous season’s ending, though. I like the measured way the two become friends again, however, and I didn’t mind that the season ended with a kiss, but not a definite reuniting as a couple.

The supporting cast, including Richard and Emily Gilmore, and the wacky residents of Stars Hollow, Connecticut, are still all on point. Stars Hollow remains one of those storybook towns like Bedford Falls or Mayberry, where every person is a character and your dream home promises to be right around the corner. In another series, you would expect this idyllic setting to be covering up a hidden evil. But, not in this show. I still want to live in Stars Hollow.

So, Rory graduates from Yale, but she doesn’t get the fellowship with the New York Times that she really wanted. Instead, she’s going to be working as an underpaid and overworked reporter on the campaign of—guess who?—Barack Obama. Mother and daughter who have always seemed inseparable are about to be separated, and, while sad, this is also a part of growing up.

I’ve also read that the actors on the show didn’t know that this was going to be the final season. I’m not sure how that could be true. This felt like a final season to me, almost from the first episode. Maybe that’s because I knew it was the final season going into it. On the other hand, there’s no way that last episode could have been anything other than a finale. Where could you go from there?

I guess I’ll find out when I watch the Netflix continuation. I’m starting that one next week.

I have enjoyed watching all of Gilmore Girls, which I still consider a Master class in character- and worldbuilding. The dramatic elements of the show did have a tendency to slip into the soap opera realm, sometimes predictably, but even in this, the Palladino family knew how to do it correctly. The first step is to create characters that the viewer cares about. Then, you throw problems at them and allow them to solve them, or not. Rinse and repeat. Relationships seldom, perhaps never, run smoothly, and you don’t always get the happy endings you want.

The end of the series is bittersweet but satisfying.

I will miss watching this show.