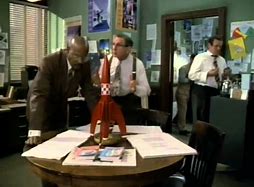 Usually, when I’m reviewing an individual Trek episode (one that’s not part of the original series) it’s because the episode was so good that it made my All-Time Best Trek list. Occasionally, I’ll write about an episode that disappointed me as well. But, I do try to accentuate the positive here, of which there is an abundance across all of the Trek platforms.

This episode is an outlier. It earned 3.5 out of 5 stars from me when I watched it, not quite a high enough rating to land it on the All-Time Best Trek list, but a respectable score nonetheless. But, it resonated enough with me that I knew I had to spotlight it in some other fashion. Which is what I’m doing now.

This is a great episode of television, even though it may not necessarily be one of the best episodes of Trek. I’ll explain what I mean. And, I’ll qualify all of this by saying it doesn’t hurt my feelings at all if “Far Beyond the Stars” is on your personal Trek Top-10. My own ranking of the episode may change over time.

The premise of the episode is a simple one. Captain Benjamin Sisko finds himself transported back to 1950s Earth, where he is a science-fiction writer named Benny Russell. All of the other actors on DS9, including the actors we’ve never really seen because of the makeup and prosthetics they normally appear in on the show, play other characters in the life of Mr. Russell.

How Sisko ended up here is really beside the point. In fact, I’m probably forgetting the underlying explanation. Something about Sisko’s grief at losing a friend, a fellow captain, in the Dominion War, and it’s all tied into the Prophets and those “visions” Sisko was having in an earlier episode. You know . . . reasons. And, they don’t really matter, because it’s just an excuse to do an episode set in 1950s New York City.

On a lesser show, this would have been an “it was all just a dream” episode. This one almost was that, in fact. At the end of the episode we’re left with a minor chunk of philosophy that states that Sisko is “the dreamer . . . and the dream,” and the question remains did Benny Russell create Benjamin Sisko, or was it the other way around? It’s an interesting premise. I’m still in the middle of Season 6 of the series and don’t know how it all ends, but I hope there isn’t a St. Elsewhere-style snow globe in DS9’s future. Look it up, kids. I’m sure it’s on some clickbait list of disappointing series finales somewhere.

Let’s forget the framing device for the episode, just for a moment, and talk about the episode itself.

“Far Beyond the Stars” is a period piece about the Golden Age of science fiction, and about racism and sexism in that same period. I love the fact that the show itself is paying homage to the science fiction creators who toiled in the medium before it became mainstream. The fact that we’re openly addressing prejudice of any kind without wrapping it in our usual Trek clothing is also refreshing. In the Trek world, bigotry is usually addressed allegorically. Humans have evolved past petty differences. But . . . this was definitely not so in the 1950s (or even, we should admit, in the 2010s).

Benny Russell is a writer for Incredible Tales magazine. A science fiction writer. Russell accepts a sketch of a space station from the magazine’s illustrator that he plans to base his next story upon. This space station is, of course, Deep Space 9. Another writer on staff is Kay Eaton (who is Nana Visitor but certainly not Kira Nerys). Both Russell and Eaton are encouraged to sleep in on the morning a group photo is taken of the writing staff for the next issue. The public doesn’t need to know that women and blacks are writing for the magazine.

I cut my eye teeth on Golden Age science fiction. I recognized the Colm Meaney character, Albert Macklin, as an homage to Isaac Asimov, who also had a penchant for robots. The Kay Eaton character is a reference to any of the women who used their initials or pseudonyms to disguise the fact that they were, in fact, female. Catherine Moore was one great example, writing as C. L. Moore, but so was Trek’s own Dorothy Fontana, known to all self-respecting Trekkies as D. C. Fontana. The Benny Russell character reminds most aficionados of Samuel R. Delany, who was active in the 1960s, not the 1950s.

This episode pays tribute to the creators who laid the foundation that would eventually result in the Trek franchise. At the same time, it addresses inequality in frank ways that no other Trek episode really has. If you’re ever a contestant on Jeopardy, and the answer is “The only Trek franchise episode where you will hear the N-word used,” the question is this: “What is ‘Far Beyond the Stars,’ Alex?” If the first televised interracial kiss is relevant, so is this factoid.

The story is fairly straight-forward. The magazine won’t print Benny’s DS9 story because it features a black captain. Benny is obsessed with the story and writes six sequels. Just when it seems that Benny’s first story will be published after it is rewritten to have been a dream, tragedy strikes when Benny’s friend Jimmy (who is and isn’t Jake Sisko) is shot and killed by two dirty cops (Weyoun and Gul Dukat, out of makeup). Then they severely beat Benny as well. When Benny returns to the magazine’s office on the day his story is supposed to be printed, he finds out that there will not be an issue for the month because the publisher decided to pulp the entire run, because the hero of the story “Deep Space Nine” is a colored man. Then, to add more insult on top of insult and injury, Benny is terminated by the magazine. Benny Russell has a nervous breakdown worthy of a Twilight Zone episode, and he is yelling that he created the future and that it’s real. You can pulp a story, but you cannot destroy an idea!

Captain Benjamin Sisko wakes up in the infirmary, with his family and Dr. Bashir standing over him like the characters around Dorothy’s bed after she returned from Oz. Sisko’s relapse into “visions” is over, his neural patterns righting themselves.

The reason why this isn’t a great Trek episode, in my opinion, is because it really has nothing to do with the on-going story of DS9, except in just a superficial, novelty way. It’s fun to see all of the familiar actors playing other roles, I admit. As his father is about to leave the station, Sisko does say that the dream has encouraged him to stay on the station and keep fighting “the good fight,” which is also thin justification for this brief narrative detour, since I never bought the fact that Sisko was wavering in his dedication to Starfleet in the first place.

Just because I don’t believe it’s great Trek doesn’t mean it’s not great television. Relevant subject matter, as much today as when this first aired 20 years ago. Plus it honors the unsung heroes of all television, the writers. And, it’s a good-looking, well-directed episode. When you consider that Avery Brooks directed an episode in which he appears in nearly every frame, that’s no small accomplishment. This episode deserves all of the praise heaped upon it.

In the end, we’re all left pondering the central question. Did we create Benny Russell, or did he create us?