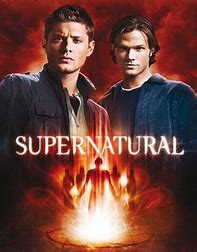 It’s safe to say, considering the turbo-viewing that Supernatural has gotten from me this year, that I am a fan of the series. This program has reinvented itself, sometimes in small ways, each season. Season 5 was no exception.

If you will recall, Season 4 ended with Sam Winchester (Jared Padalecki) inadvertently releasing Lucifer from his prison. This gives us our season arc for the fifth season. Sam and Dean are going to try to remove Lucifer as a threat, either by killing or recapturing him.

As the season begins, some unknown force, presumably God, transports Sam and Dean Winchester (Jensen Ackles) from the site where Lucifer is rising from his prison to begin Armageddon and places them safely on an airplane passing overhead.

Later, the prophet, writer of the Supernatural novels, Chuck Shurley (Rob Benedict) tells the Winchester brothers that the angel Castiel (Misha Collins) was killed for helping them, and that the angels have somehow lost the sword of the archangel Michael, a weapon capable of defeating Lucifer. Chuck gives them a cryptic clue—”in a castle on a hill made of forty-two dogs”—which leads them to their father’s storage unit.

They tussle with demons, including Meg Masters (Rachel Miner), and their now-possessed friend Bobby Singer (Jim Beaver). They defeat the demons, with Meg escaping, and Bobby overcomes his possession by stabbing himself with the demon-killing knife. Bobby ends up paralyzed from the waist down from his wounds.

As it turns out, the clues about the sword were planted by Zachariah (Kurt Fuller). Zach tells them that Dean is actually Michael’s “sword,” the human vessel which will be taken over by the archangel. Zachariah attempts to force Dean to give Michael permission to use him as a host. Castiel reappears and forces Zachariah to leave, insinuating that it was God himself who revived him and saved the Winchesters.

Lucifer takes a human host in the form of actor Mark Pellegrino, who played Jacob on Lost. He’s been in a lot of other things as well, but that’s the role I remember most.

Since it is the Apocalypse, the Four Horsemen are on the loose, and they figure heavily in the episodes going forward. Bobby receives a call from another hunter about River Pass, Colorado, which is swarming with demons. Here, the Winchester brothers are reunited with Ellen Harvell (Samantha Ferris) and her daughter Jo (Alona Tal). It turns out the Horseman known as War is behind all the shenanigans, and there are no real demons, only illusions. Sam and Dean end up getting War’s ring, the source of his powers, but they don’t kill War. Ellen and Jo appear again later this season, in what would seem to be their final episode.

Dean and Sam end up parting ways for a couple of episodes, because neither really trust Sam anymore after his demon-blood-swilling ways and releasing Lucifer. Sam, as always, tries to live a normal life, working at a restaurant. Of course, he is denied a normal life, as he is recognized by other hunters and forced to admit his role in the Apocalypse. Sam is also visited by Lucifer, who wants him as his human vessel. Nick, his current vessel, is not holding up well.

Castiel and Dean track down the archangel Raphael, who claims that God is dead, and that he suspects it was Lucifer who saved Castiel and the Winchesters. While the brothers are still separated, Dean goes on another time-traveling jaunt, this time five years into the future, where the Croatoan virus has devastated the world. Zachariah tells Dean this is all the result of him refusing to be the Michael vessel. In this future, Sam has accepted his role as Lucifer’s vessel. Sam/Lucifer kills future-Dean. This doesn’t convince Dean to accept his role as Michael’s “sword,” but it does end up with him reconciling with Sam.

Any 22-episode season is going to have some episodic episodes that aren’t actively propelling the season-long arc. Season 5 has a few of these. One episode, guest-starring Paris Hilton, involves a seemingly-cursed wax museum, including a murderous Abraham Lincoln. Another involves a powerful child who turns out to be the Antichrist, but is reminiscent of that Billy Mumy Twilight Zone episode where the kid was wishing everyone into the cornfield. Then we have people who are mysteriously aging, a wraith in a mental hospital, a Supernatural fan convention, a boy using a spell to pull a Freaky Friday with Sam, dead people coming back to life in Bobby’s hometown, the Whore of Babylon as a ultra-conservative Christian cult leader, and a hotel convention with a group of pagan gods. You know, the usual.

Along the way, the Winchester brothers get the rings from the remaining Four Horsemen: Famine, Pestilence and War. The rings, they discover, are the key to opening up Lucifer’s prison cell again.

During the season, we learn that the Trickster (Richard Speight Jr.), from seasons past, is actually the archangel Gabriel (also, apparently, the pagan god Loki). And we meet the demon Crowley (Mark A. Sheppard), who gladly hands over the magical Colt revolver he received from Bela, on the condition they use it to kill Lucifer. He continues to assist the Winchesters this season, but he is a demon, so he’s not necessarily reliable, although he does give Bobby the ability to walk again. By the way, the Colt doesn’t work on Lucifer.

Dean and Sam also get killed and sent to heaven for an episode. There they find Ash (Chad Lindberg) in his version of heaven, Harvelle’s Roadhouse. Ash isn’t aware that Ellen and Jo have died, which makes me wonder if they won’t appear again. Castiel directs the brothers to talk to the angel Joshua, who claims to be responsible for saving Castiel and putting the Winchesters on the airplane. God, Joshua says, will not help them. The angel returns them to earth and tell Castiel everything. Castiel seems to have lost his faith.

Also, Dean, our resident time traveler, gets to go visit the younger versions of his mom and dad again, this time with Sam in tow. A fallen angel named Anna (Julie McNiven) has travelled to the past to keep Sam from being conceived. The day is saved by the archangel Michael, who points out the parallels between Lucifer-and-Michael and Sam-and-Dean. Lucifer is Michael’s younger brother, and he loves him even though he has to kill him as the “good son.” Dean remains convinced to do things their way, still refusing to be Michael’s vessel.

Sam becomes a willing vessel for Lucifer, planning to use the four rings to put Lucifer back in his cage.

The final battle is in Stull Cemetery right outside of Lawrence, Kansas. When all is said-and-done, Lucifer (in his Sam vessel) is back in his cage, along with Michael (in the vessel of Adam Winchester). Castiel and Bobby were killed by Lucifer, but God resurrected Castiel again, as an even more powerful angel, and he brings Bobby back to life. As the season ends, Castiel is going back to Heaven to bring order since Michael is gone. Dean goes to see his long-lost love Lisa, supposedly settling down to a “real” life. Chuck Shurley, the prophet who has been writing all of these stories, finishes typing the last story and vanishes.

It all seems a little like a series finale until a street light flickers outside of Lisa’s home, and we see Sam—or something that looks remarkably like Sam —watching the family through a window. Of course it’s not over.

This is the season that Supernatural fully embraces angels as a supernatural force, although not all of the angels are allies of the Winchesters. This is also the final season that creator Eric Kripke would serve as showrunner. It will be interesting to see how the show differs because of his absence.

I enjoyed this season, but not quite as much as I enjoyed Season 4. The final battle between Lucifer and Michael lacked the tremendous punch I was looking for. Plus, angelic powers are proving a bit problematic from a storytelling aspect. How many times can characters be killed and brought back to life?