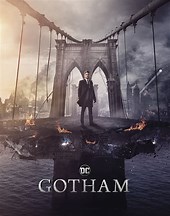 Way back in March 2018, I announced that I was going to stop watching Gotham after Season 4. It was one of the series on my DVR that I put off watching each week. My lack of enthusiasm to watch the show was a sign. And my decision to stop watching was final.

Until the forces behind the series did something diabolical and announced that Season 5 would be the final season, and that the season length had been cut nearly in half. At my core, I am a completist. Since the end of the series was in sight, I couldn’t imagine not watching the final season. The shorter length of the season might even encourage less meandering plot threads and a more cohesive seasonal arc. Right?

I should have trusted my instincts.

Most of the time I spent watching Season 5 was a waste. Since I now have fewer years ahead of me than behind me—statistically, and realistically, speaking—this really hurts me. Deeply. This is time I can’t get back. I don’t even like taking the time to write about it, since I rarely invest time on negative reviews. However, it’s that being a completist thing again. Plus, I pretend that there are people who care about my opinions. It’s one of the things that gets me through the day.

And, this review isn’t all negative. I promise.

At times this season, it seemed like the writers of the show wanted to pattern their efforts on the ’66 Batman series, which relied on thin plots, even thinner motivations, and campy cliffhangers. It started off in a promising fashion. At the end of Season 4, Jeremiah Valeska (the non-Joker) blew up all of the bridges connecting Gotham City to the mainland, effectively cutting off the city from civilization. This reminded me of the Arkham video games, which I played, of course. I’m told this entire story arc was based on the comic book series known as “No Man’s Land,” a huge crossover event that ran throughout 1999. I wasn’t reading comics at the time and knew little about it. Recently, I discovered that a novelization of the entire story was written by Greg Rucka, an author I’ve read before. A quick search of Amazon revealed that the book is available, but at a higher price than I’m willing to pay right now. Maybe later.

So, all of Gotham City is divided up between gangs of criminals, except for the piece ruled by the GCPD around the station house. It’s post-apocalyptic Gotham, where there is very little law and order remaining.

Sounds exciting, doesn’t it? Batman’s villain roster is arguably the best in superhero comics (Spider-Man probably gives him a run for his money). The potential for a story about a Gotham divided between Batman supervillains seems high. Yet, somehow, the Writers’ Room of this show managed to fumble the ball again.

We trot out the same old tired villains from seasons past. Penguin (Robin Lord Taylor) and The Riddler (Cory Michael Smith) become more comic relief than genuine threats. Poison Ivy returns as a stupid side plot, played again by Peyton List (the third actress in the role on the same series, but who’s counting?). Jeremiah (Patrick Monaghan) returns for a brief subplot in the middle of the season, but we still don’t call him the Joker. The show always experiences an uptick in quality whenever Jeremiah the non-Joker is featured, but this doesn’t raise the tide for the rest of the boats in the water. Hugo Strange (BD Wong) is around whenever we need a convenient mad-scientist-type plot device, but that’s about it.

The new villains introduced during the season do little to help the quality of the show. Eduardo Dorrance (Shane West) is introduced as a soldier buddy of Jim Gordon (Ben Mackenzie), and he later becomes the villain Bane. I didn’t think Bane worked in The Dark Knight Rises, and this was yet another fail. We also get, briefly, Nyssa al Ghul (Jaime Murray), who is, as you know, the daughter of Ra’s al Ghul (however you choose to pronounce it). She’s wanting revenge for the murder of her father, of course. Because Nyssa and Ra’s were also characters on Arrow, I found it difficult to become invested in their Gotham appearances (although I liked Alexander Siddig in the role).

It seems like we’re trying to shoehorn in every character we’ve met in the previous four seasons, no matter how awkwardly it is presented. But, Gotham has always been about the rise of Jim Gordon, and the rise of Batman. These were the stories I expected to see play out in the final twelve episodes. They do, sort of, but not until episode twelve. The preceding eleven episodes still manage to meander, even with the shorter season.

In hindsight, it becomes obvious to me that there was a clear agenda to the snarl of plot lines. The showrunners wanted to finish giving the viewers an origin story for the Joker, even though Jeremiah is never referred to by that name. When you have an episode titled “Ace Chemicals,” you have to figure the origin story would loop back to where it began, way back when Bob Kane was drawing Batman and taking all the credit for everything. Also, we had to have a plausible origin for Batgirl. Barbara Kean (Erin Richards) was obviously not going to become a masked vigilante, although her turn from villain to pillar of the community was equally unbelievable. So, Jim Gordon and Barbara were forced by the writers to have a single night of passion, resulting in the eventual birth of a baby girl that Barbara named Barbara Lee Gordon. This also conveniently allowed Gordon to end up with Lee Thompson (Morena Baccarin), who has ceased being a villain as well. In the penultimate episode of the season, Jim Gordon is promoted to commissioner, which is something else that had to happen before the finale.

The last episode of the season (and series) included a ten-year time jump. I can understand why. The Bruce Wayne we’ve had up to this point, the terrific young actor David Mazouz, still isn’t old enough, or physically imposing enough, to don the cowl and cape. He needed some seasoning. During the ten years that Bruce was abroad, Selina Kyle fully took on the role of Catwoman, master thief, and Camren Bicondova was traded in for an older model. I didn’t mention Selina as one of the villains earlier because, let’s face it, she’s been a love interest up to this point. Jim Gordon wears a mustache, but only briefly, as a nod to lovers of comic book tradition. And the klieg light that will become the Bat Signal makes an appearance. Everything is choreographed so that Jeremiah makes his reappearance from Arkham Asylum as a fully-formed Joker (still not called Joker), and he does. But, it’s not my Joker. I was slightly let down by his final appearance, which was more Cryptkeeper than Clown Prince. Plus, we get neither a full reveal of the adult Batman nor Bruce Wayne.

I have more than communicated my disappointment with Season 5. I promised this wouldn’t be entirely negative, so let’s see if I can make good on that.

I’ve watched this series since the beginning. I thought the premise was ballsy and intriguing. A Batman series without Batman. Kevin Smith is a diehard Batman fan, and a nerd guru whose opinions I normally agree with. He wouldn’t watch this show because the premise didn’t make any sense to him. During the first three seasons, I really wanted him to take a chance on the series because I think he would have liked it. The first three seasons were good. Maybe not great, but good. Things didn’t really take a nosedive until Season 4.

Gotham is primarily about Jim Gordon’s return to the city and his (at times) one-man crusade to clean up Gotham. As the city seems to create super-villains, Gordon battles not just these criminals but the rampant corruption at the very heart of the city, in politics, in business, in everything. Ben Mackenzie was excellent as Gordon, and is believable as a single-minded, overgrown Boy Scout.

Gordon comes into young Bruce Wayne’s life after the death of Bruce’s parents, Thomas and Martha Wayne. The connection the two men would share years later began here, and the growth of their relationship is handled well. David Mazouz was a perfect casting choice for the young Bruce. He captured Bruce’s intelligence, focus, and fundamental darkness like a more seasoned actor. His actions weren’t always internally consistent because the writing wasn’t. Bruce’s butler and guardian, Alfred Pennyworth, was portrayed by Sean Pertwee. At first, I thought Pertwee was a terrible casting choice. I’ve always pictured Alfred as tall, slender, balding and sophisticated. Pertwee plays Alfred as someone a little more rough-and-tumble, a man you want to have on your side in a fight. Pertwee’s Alfred quickly became one of my favorite characters on the show. He is a former British SAS soldier, so the combat-ready Alfred makes perfect sense. He’s also responsible for a lot of Bruce’s early training.

Donal Logue also shines as Detective Harvey Bullock, a GCPD cop who’s not completely corrupt but who’s no Boy Scout either. I never liked the character of Bullock in the comics or in that great cartoon, but I grew to like him on this show.

This was also a good-looking series. Gotham City looked as grimy and shadowy as it should. It was noir-ish, but stayed clear of the exaggerated Art Deco influences of the Tim Burton films. While the show was set in the modern present-day, with cell phones and computers, it still paid homage to the late 1930s and early ’40s, when Batman first appeared in comic books.

When I reviewed Season 4, I commented that the show was an example of the whole being less than the sum of its parts. There’s a lot of good things about the series, but somehow, in the end, all of what I liked about Gotham never found a way to consistently gel. I still wouldn’t hesitate to recommend the first three seasons.

The finale episode convinced me that a series based on the “Year One” storyline from the comics could work. James Gordon and an adult Bruce Wayne arriving in Gotham at the same time, the two men developing a kind of symbiosis as they take different paths in their shared mission to clean up the city. It’s probably too soon to see that happen, but it’s definitely a Batman series I would watch. Maybe someday.

The series as a whole is somewhere in the C-to-B-minus range. Watch the first three seasons in their entirety. Fast-forward your way through the rest.

Firewater is a middle-aged pop culture fan whose life is sustained by his word count.
FictionMachine

Deconstructing the machinery of cinema.

Where we talk reviews, theories, discussions and more

A comedic based review of the Marvel and DC live action universes,

Keeping the Good in Geek! Your go-to source for concrete discussions, opinions, and updates on all things GEEK!

Thoroughly Reviewing Old TV Shows, Movies, and Books Before You Forget Them