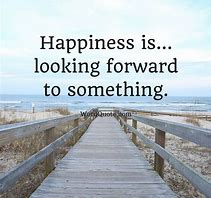 Several years ago, I adopted as my personal philosophy the bit of stolen wisdom that—as the above epigram states—happiness is looking forward to something. (I also stole “Every day is a good day,” a powerful zen koan, from my brother-in-law, who sold mobile homes before he retired. It has become my personal mantra and my normal response to the greeting “How are you?”)

I still love the simplicity of the Looking Forward philosophy, and still believe in its fundamental truth. Pleasant anticipation is an uplifting sensation. In many ways, the anticipation of a thing or an event is even better than the thing, or event, itself. Here at FirewaterCo, where our motto is “Read, Play, Watch” (Jeepers, all these philosophies, koans and mottos . . .), our only product is these blog posts, the majority of which concern my never-ending pursuit of story, above all else, and entertainment. This pursuit is fulfilled through reading books and comics (graphic novels, if you’re nasty), playing video games on my PS4, or watching movies and television series. Lots and lots of television series.

With this plethora of entertainment options, my plans are always full, as is the list of finished series, games and books I have yet to write about. If you’re like me, a full “to do” list makes you happy. If a full list causes you stress and unnecessary frustration, this particular pursuit of happiness is not for you.

Since the February update, I finished reading the following books.

I am currently reading the following:

I expect to be finished with these prior to the next update (with the possible exception of the GRRM, which is huge). As I finish the above, the following books are on-deck:

Since February, I’ve watched an unusual number of movies. The “Watch” portion of the plan is always slanted heavily towards television. I watched the following:

During the next four months, I plan to watch the following movies:

I haven’t seen Captain Marvel or Avengers: Endgame yet either, but I doubt I’ll watch them before October. There may be other movies that happen, but I haven’t planned for them.

Something I’ve neglected to include in these Looking Forward updates are the Star Trek movies I’ve been watching for my on-going 15-Minute Federation project. I’ve been watching all of the movies in 15-minute segments each week, while taking copious notes. Even though I’ve been slow to write the posts (I’ve just begun Star Trek: The Wrath of Khan on my website), I’m actually almost finished watching Star Trek V: The Final Frontier. I fully expect to be through Star Trek VI: The Undiscovered Country and Star Trek: Generations prior to the next update. And, yes, Virginia, I am really watching them in 15-minute segments, once a week. This is total nerd immersion (nerd-mersion?).

Now, moving on to the biggest segment of “Watch”: television series.

During the next four months, I’m looking forward to watching all or part of the following:

There are plenty of other series that I’m looking forward to, but they may not be out before my next update. Westworld: Season 3 and Better Call Saul: Season 5 won’t premiere until 2020.

Since February, I finished playing the following video games:

Because Return to Arkham also includes Arkham City, that game is on-deck to play next, of course. I also repurchased Arkham Knight at GameStop, and am looking forward to playing it again. Spider-Man reminded me, in many ways, of the Arkham series, so I wanted to play them all again. Ah, nostalgia.

I haven’t purchased God of War or Far Cry 5 yet, but there is an outside chance that I may before the next update. In any case, I’m looking forward to playing those games when the price is right.

There are things other than entertainment that I’m looking forward to, of course. Our granddaughter in Wisconsin is getting married in August (last we heard) and we’ll be heading north for that occasion, of course.

My next appointment with the neurosurgeon is in July. I’m already back at work now, restricted to lifting no more than 20 pounds. I’m hoping to get a full release next month. I’m still experiencing some partial paralysis in my legs and feet, and some sciatic nerve pain, but nothing I can’t live with. I’m walking without a cane and I feel 1000% better than I did prior to my back surgery. The difference is nothing short of miraculous.

I also began a new dietary lifestyle after my surgery. Nothing revolutionary, just controlling my calorie intake and increasing the amount of vegetables I eat. I’ve lost 17 pounds so far. But, I’m looking forward to losing a lot more, in a gradual and healthy way. I’m dropping about 1 to 2 pounds a week currently, which seems right. The plan is to get back to my college weight. I’ll keep you posted on my progress.

I will say this: Boca burgers aren’t exactly meat, but they ain’t bad either.

I’ll file my next update in October.

By the way, is there a better word to describe the frequency of these reports than “thrice-yearly”? How about “quadmonthly”?