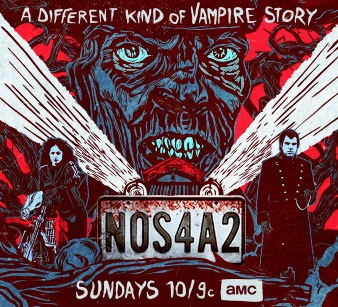 I’ve never read the book NOS4A2, by Joe Hill (who we all know is Stephen King’s eldest son).

I have it on a shelf in my library closet. This is a deep, walk-in closet in our office that’s lined with bookshelves, which are, naturally, filled with books. The closet was built like this when we bought the house 17 years ago. I didn’t put the shelves up, even though it seemed like the closet had been designed especially for me. It was an important selling point, even though the real estate agent didn’t know it. I was wearing my poker face.

I plan to read the novel one day soon, but not until after I’ve read the Joe Hill novel Horns, which is also in the library closet. That was Joe’s second novel. I did read his first novel, Heart-Shaped Box, and I loved it. I also read his short story collection, 20th Century Ghosts, and I loved that as well. I feel like it’s a safe bet that I’ll like NOS4A2 when I read it.

I still haven’t read Joe Hill’s comic book, Locke & Key, although I’ve read positive reviews of it. It’s on the list, too.

I can’t promise I won’t compare it to other AMC series such as The Walking Dead (you may have heard of it) or Preacher, which is about to kick off its final season. These two shows, with their elements of the supernatural or just the fundamentally weird, are the first two that come to mind. Of course, these were both adaptations of comic book properties, while this has its source material in a novel. Joe Hill does have a comic book connection, though.

I’ve spent enough time hemming and hawing here. I’ve watched the first episode, “The Shorter Way,” and the first episode only. I’m not one of those reviewers who’s seen six out of the ten episodes already and knows everything that’s going to happen. I’m a regular viewer. Like you. I haven’t even bothered to go on-line and read a Wikipedia synopsis of the novel. I want to be surprised by the story. That’s one of the things I live for, you know.

After watching this episode, I gotta tell ya: I’m intrigued.

Maybe just a smidge enthralled and enrapt, as well. I want to watch more.

Like most of the stuff that I like to watch, read or play, this series has strong SFF elements. There’s a cool-looking wooden covered bridge, one that’s not supposed to exist, which seems to provide magical shortcuts for one of our protagonists, allowing her to find things that are lost. There’s another female character who uses a bag full of Scrabble tiles to spell out secrets, Ouija-board-like. There’s a creepy old man in chauffeur livery who’s kidnapping children and driving a vintage Rolls-Royce Wraith with the vanity plate NOS4A2. That the character seems to be getting younger as his young kidnap victim is drained of energy, as if by a vampire, makes the vanity plate seem a little on-the-nose. But, hey, that’s okay: it adds to the storybook surreal quality of the show. Just like the fact that the creepy old man is taking the kid to a place named Christmasland, where every day is Christmas Day.

We get it. NOS4A2 is supposed to read as Nosferatu, that 1922 German Expressionist horror movie based on Bram Stoker’s Dracula. Interestingly (to me, at least), Joe Hill’s novel was titled NOS4R2 in the UK, perhaps because of the difference in pronunciation between the Brits and the Yanks. As an American Southerner, I may be linguistically closer to my UK cousins, because I prefer their vanity-plate spelling. I am, however, an admitted Anglophile.

Max Schreck’s appearance in that 1922 film has become iconic. If memory serves, the head vampire in the TV version of Stephen King’s ‘Salem’s Lot (which was quite effective for its time) resembled the Nosferatu vampire. The elder vampires in Buffy (I’m thinking Mark Metcalf’s portrayal of The Master here) were Schreck-like as well. I don’t think I’ve seen any Nosferatu type vampires in the series Supernatural yet, although I’m only up to Season 7.

Charlie Manx, the limo driver on this show, doesn’t look anything like Max Schreck either, although he does look creepy. I also appreciate that Manx is performed by the actor Zachary Quinto, who was once the main supervillain in the comic-book-like series Heroes (before it passed its shelf life). That he was also the new Spock in the Abrams movies was a fact not lost on me either. Quinto checks a lot of nerd boxes.

If Manx is supposed to be some type of vampire, I won’t be surprised. I’m also impressed by Hill’s creativity here. If this is a vampire tale, it is uniquely framed. That the vampire seems attracted to young people with certain extranormal abilities also reminds me of a Stephen King novel I read once. Doctor Sleep, I believe it was called, and it was a sequel to The Shining featuring a grown-up Daniel Torrance and a group of travelling psychic vampires in RVs, not in Rolls-Royces. Joe Hill’s book was actually published months earlier than his father’s, and the similarities are probably coincidental. Or genetic.

It doesn’t matter anyway. I would have pointed out the resemblance even if the writers weren’t father and son. It’s difficult to find anything in horror or speculative fiction that doesn’t remind me of something else since I’ve read so much of it over the years. Art always builds on what came before, and I prefer to think of similarities as tributes or homages rather than intellectual theft.

So, this first episode checks off a lot of boxes, not just the nerd boxes but, for lack of a better term at the moment, the Stephen King boxes (I told you it would be difficult for me to leave King out of this review). That alone might have been enough to encourage me to watch beyond the first episode. However, NOS4A2 also appeals to my love of character-driven stories. Joe Hill seems to innately understand this, the same way King does when he’s running on all eight cylinders.

The character I most identify with in “The Shorter Way” is Vic McQueen (with a 20-something Ashleigh Cummings playing a passable high school senior). I assume Vic is short for “Victoria,” but intentionally evocative of police slang for “victim.” Vic is a blue-collar wannabe art school student with a punk rock aura. She is the almost-cliché townie who feels like she doesn’t belong with her economic peers, who deride her sober tendencies by calling her “straightedge,” or certainly with those members of a higher social caste, like her friend Willa (Paulina Singer). Vic’s mother cleans houses for a living, and Willa’s house is one of these.

Vic’s mother is perhaps a little less overbearing than Carrie White’s mother, but she does seem determined to stomp on Vic’s dreams of going away to attend art college. It is her father who seems to be the dreamer in the family, a failed musician who works in demolition to make a living. He’s portrayed by Ebon Moss-Bachrach, whom I saw most recently as Micro in Netflix’s The Punisher. I enjoy the father-daughter relationship painted in this first episode, even though it is strongly suggested that Vic’s dad is a drunk and wife-abuser and (as revealed at the end of the episode) an adulterer. That Moss-Bachrach manages to make such a character somewhat appealing even with these revelations is a testament to his acting abilities.

It is the human drama centered around Vic that gives the series a grounding in reality. Like the best of Bradbury—or, dare I say it?, King. Without this quality, this would be little more than a twisted bedtime story. The character-driven parts help make the more fantastical elements seem plausible somehow. It is definitely a type of magic.

The parallel story line about the Scrabble-tile librarian oracle investigating the kidnapping is only marginally interesting to me so far. As is the Rolls-Royce road trip. As Vic McQueen is drawn more fully into that world, I’m sure I’ll become more interested in that. Something called Christmasland sounds absolutely horrifying to me, but that may be the point.

I’m on board for whatever comes next. I’m cautiously optimistic.

The “minus” part of this grade is the cautious portion of my optimism.