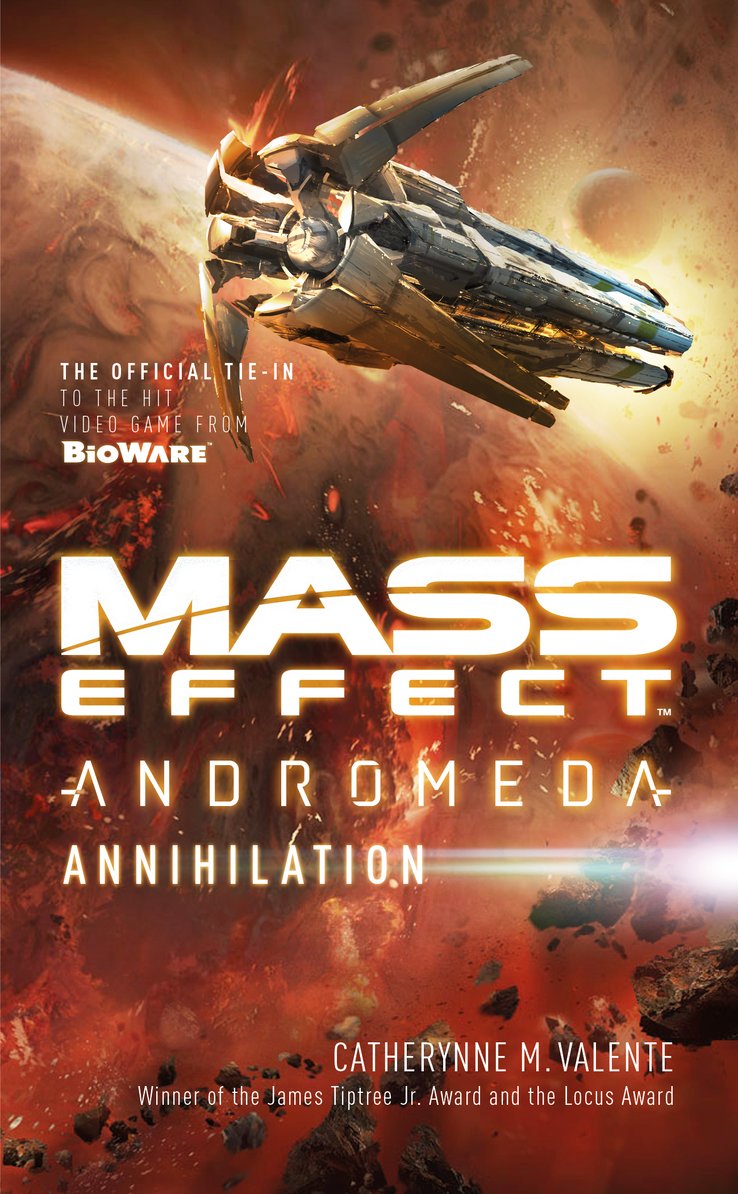 This novel is the third media tie-in novel to Bioware’s fourth Mass Effect video game, Mass Effect Andromeda. The game itself received mixed reviews. I liked it a lot. Not as much as Mass Effect 2, certainly, but easily on a par with Mass Effect 3.

Of the three ME Andromeda novels, this was my least favorite.

Well … one of them had to be least favorite, right? This in no way is a swipe at author Catherynne M. Valente. She is a good writer. Furthermore, she is obviously a fan of the Mass Effect game series. She understands the different alien races better than most writers, and in ways that only someone who loves playing the games could possibly achieve. The Hugo award-winning author’s bona fides are not in question here.

This is the story of the missing quarian ark, the Keelah Si’yah. While the majority of the passengers in cryosleep are quarians, this ship also carries drell, hanar, elcor, volus and batarian passengers as well. One player complaint about the video game is that the diverse assortment of aliens offered in the original trilogy weren’t represented in Mass Effect: Andromeda. Perhaps this would have been remedied if the game ever had any DLCs released. As every avid ME fan knows now, no downloadable content ever appeared for this game. So, the absence of these others races remained a mystery until this novel was released.

That part of the novel is exciting. I didn’t realize how much I missed the elcor, the volus, the drell, and even the batarians. This novel offered characters who were members of these races, along with the hanar, who, I’m shocked at myself for admitting, I didn’t miss at all. Valente understands these character classes, and she writes them well. Including the quarians, of course.

The story becomes one about a virus outbreak, while at the same time being a giant locked-room mystery. We know the virus was engineered to wreak havoc on the quarian ark ship. We just need to find out who is the guilty party.

While this type of storyline is dramatic and tense, it’s not actually action-filled. That’s the main reason this is my least favorite of the novels. I know that Mass Effect isn’t always about firefights and high-energy action. But, sometimes it is. And that’s what makes the more quiet and contemplative moments more effective. There’s a lot of scientific discovery and logical reasoning going on in this novel. Yes, that has its appeal in science fiction. There’s also darn little spectacle, which I found myself missing.

I do recommend this novel for those of you who have loved the video game series, and I do so without reservation. You’ll find plenty of things that you’ll enjoy here.

But, this is definitely not meant for those readers who aren’t already Mass Effect fans. As standalone science-fiction, it doesn’t really succeed.

This will probably be the last media tie-in novel. At least until the next installment of the franchise comes out. (No, it hasn’t been announced; but, this can’t be the last we see of Mass Effect.)

I’m not going to give away the solution to the novel’s mystery in this review. You’ll have to read it to find out.

Well-written and often interesting, primarily for people who have played, and loved, the games, this novel is long on science and short on action. Recommended, but not for everyone.

Firewater is a middle-aged pop culture fan whose life is sustained by his word count.
Definitive Poetry

This hobby blog is dedicated to movie nerdom, nostalgia, and the occasional escape. In the late 90s, I worked at Blockbuster Video where they let me take home two free movies a day. I caught up on the classics and wrote movie reviews for Denver 'burbs newspapers and magazines. Today, I continue to revisit the old and discover the new on the screen. Comments and dialogue are highly encouraged. This year, I'm excited to collaborate with other writers via SLICETHELIFE in which we will share our movie genre favorites in our 2021 Movie Draft!

Speaking in a hundred silent ways

When a mage is sharing what's on his mind. Business, Motivation, Positive life, Success, Marketing and Good Ideas.

The Mom & Pop Place with Deals By The Minute!

Drinking coffee, reading, and writing with help from a cat.