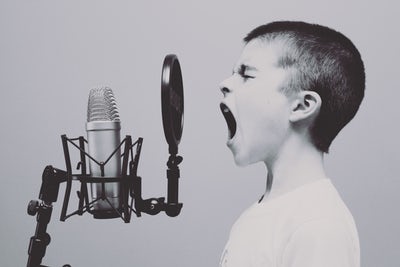 Photo by Jason Rosewell on Unsplash

When I was a young man, I was confused about what was meant by a “writer’s voice.” I was committing words to paper, not recording an outgoing message on an answering machine. How does “voice” figure into that?

Over the years, I’ve come to recognize the authorial voice. You know you’re reading Hemingway when you’re reading Hemingway. Or Faulkner. Or Stephen King, Douglas Adams, or Tom Clancy. “Voice” is a metaphor for an author’s style of writing. The word choice, subject matter, even the manner in which a character or setting is described. It’s the author’s perspective on life, the end result of how their personal perception filter sifts through all available inputs to develop their unique viewpoint. Just as no two witnesses to a traffic accident will describe the same event, no two authors will write the same scene in the exact identical way.

My wife Sharon and I were discussing songs covered by more than one musical artist. The same songs, perhaps with different arrangements or delivery. I argued that Joe Cocker’s version of The Beatles’ “With a Little Help from My Friends” was clearly the superior one. Part of the reason was the arrangement, which was a little different and featured a pre-Led Zeppelin Jimmy Page on guitar. And, frankly, Cocker is a better singer than Ringo Starr. No question.

“Tainted Love” was a cover song when Soft Cell catapulted it to fame. Marilyn Manson’s version of the song has a slightly more sinister edge to it, in my opinion. I prefer Bob Marley’s version of “I Shot the Sheriff” to Eric Clapton’s. Perhaps it’s a question of personal taste. You can chalk up the differences between versions of songs to an artist’s style, or sometimes literally their voice.

A writer’s voice is a similar thing.

There’s more to it, I believe. The authorial voice is more than just style. There’s a musicality and a cadence to words, a percussion and flow. A distinctive rhythm. The words of some authors demand a soundtrack of sultry alto saxophone music. Others, a bluesy backbeat, or raucous rock-‘n’-roll. One could argue that this is an element of style. I think it’s something extra, though.

I’ve read plenty of authors who can construct solid sentences and string them together in a logical manner. The writers I love, however, are using words to create something more than the message carried by the words themselves. There’s poetry and music and motion pictures projected directly into the mind’s eye. Some of my favorite authors can describe their fictional characters thoroughly without ever telling the reader what they look like. That, my friends, is nothing less than a kind of magic.

And an expert con job. The authorial voice is a consummate acting role. It is an illusion created by the writer, an illusion that the writer is speaking directly to the reader. As I’m typing this on my computer keyboard, I am talking to a particular person. And that person is you, the reader.

I’m also talking to myself because I am the first reader. But, I do have a particular audience in mind when I write, and that audience is formed of men and women who are not dissimilar to me, with the same level of education and twisted sense of humor. This audience will understand my esoteric references, and will laugh or groan at my attempts at humor, whichever reaction is most appropriate.

This effect is such that, in the event of my untimely death, it can still work its magic on those who read my words after I’m gone. I may no longer be a part of this world, but my voice is still in the room.

When you begin writing papers for classroom assignments, you’re often encouraged to write your paragraphs in a regimented, stilted style that takes the “I” out of your writer’s voice entirely. Use active voice. Don’t end sentences with prepositions. That’s the reason so many academic papers are sterile, dry-as-dust affairs that seem to lack heart. The authorial voice puts the “I” back into your writing. That’s the personality, the mojo, the magic. And I do believe it is magic, even if the desired effect is a deliberate one. A con job.

This message is intended for you, dear reader. Follow the sound of my voice.

Firewater is a middle-aged pop culture fan whose life is sustained by his word count.
Coaching for Geeks

Level Up Your Life with the Triforce of Geek Power - Confidence. Life Skills. Gaming.