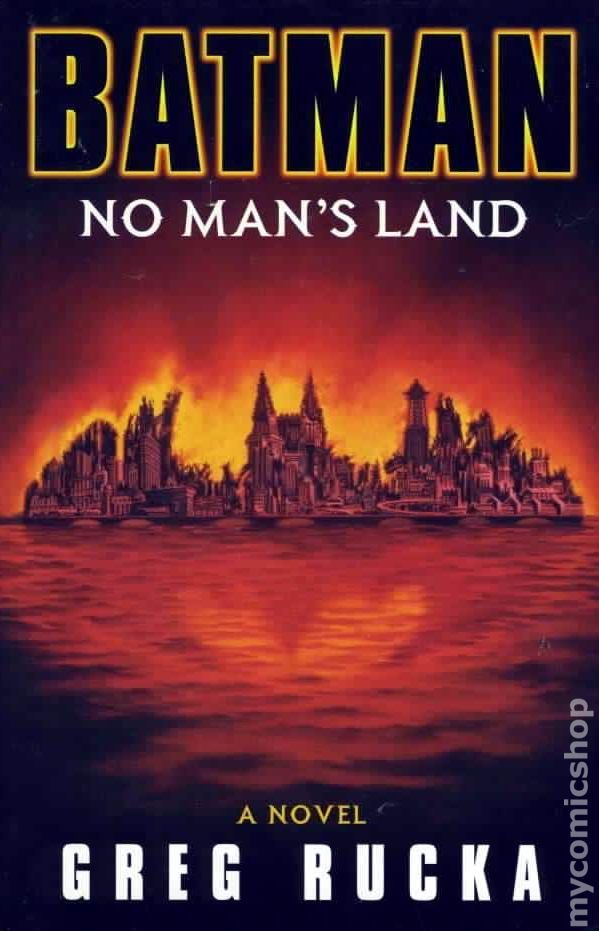 I knew who Greg Rucka was before I purchased this novel. And, not for his work in superhero comics. No, Rucka was the author of a series of novels about a bodyguard named Atticus Kodiak. I read a couple of these about twenty years ago, and, as I recall, I liked them.

Batman: No Man’s Land is the novelization of a Batman crossover comic book story line that was published throughout 1999. The novel was published in 2000.

After about a decade’s forced absence from any comic-book continuity, I had briefly been sucked back into select comics during the early-to-mid ’90s. The Jim Lee/Scott Williams X-Men was irresistible. The “Death of Superman” story line was over-hyped in the media and could not be ignored. Also, Image Comics came along and briefly held me in thrall until I began to realize it was mostly a matter of style over substance. Until the rebirth of the superhero genre in movies and on television, comic books no longer appealed to me as much as they once did.

I missed the entire “No Man’s Land” story when it was published. I also missed “The Killing Joke” and “Knightfall,” not to mention everything that came after, including Scott Snyder’s New 52 run, which I’ve only just begun to read. Sure, I watched the Christopher Nolan Dark Knight trilogy. It was a mixed bag, and—with no disrespect intended for the departed—Heath Ledger remains my second least-favorite Joker ever (it will be hard to sink lower than Jared Leto’s Abercrombie & Fitch take on the Clown Prince of Crime). In spite of all of this, I still consider myself a Batman fan. I’ve watched the Ben Affleck version in those movies, and still think he was a good casting choice for both Batman and Bruce Wayne. I’ve played all the Arkham video games and enjoyed those as well. I even liked the first three seasons of the Gotham television series.

This is what led me to No Man’s Land. In the summer of 2015, I began playing Rocksteady’s Batman: Arkham Knight (I’m playing it again, soon), which featured a Gotham roughly five times the size of the Arkham City prison map and a playable Batmobile. In the video game, Gotham is cut off from the mainland. As I recall, you were unable to leave the city itself, but I can’t remember if it was because the bridges were down or just uncrossable. I do remember someone mentioning “No Man’s Land” at the time, however, a fact that I filed away with no intention of ever following up on it. Then the 2018 finale episode of Season 4 of Gotham was titled “No Man’s Land,” and the Internet went crazy with speculation that Season 5 would follow the story line from the comics. It did. Sort of.

Even before the final 12-episode season of Gotham kicked off, I had begun my Amazon search for “No Man’s Land.” Initially, I was looking for an omnibus collection of the comic book story itself. There were many such volumes and the cost was prohibitive. But, I discovered the existence of Greg Rucka’s novelization during this time.

I was sidetracked initially by Denny O’Neil’s novelization of Batman: Knightfall, which also existed, and I decided to read that one first since it came prior to the other story on the timeline as well. But, I eventually found an affordable copy of the Rucka novelization and purchased that one. In hardcover. It sat on one of my bookshelves a while before I began to read it.

I can’t compare this book to the crossover story, since I’ve never read the comic books it was originally published in. Superhero stories are primarily told visually, and I’m sure that there are differences between the comic books and this novelization. There always are. But, I don’t know what they are. As I’ve been told, ignorance is bliss.

There are three other things I can compare this book to, however.

The first is the only other novelization of a Batman story line that I’ve read, the O’Neil book. I liked Knightfall more than I liked this one. It was just a more engaging story to me, even if it was a less cohesive one.

That has nothing to do with the ability of the writer. Which leads me to the second thing I can compare this book to: other novels written by Greg Rucka. I also liked the Atticus Kodiak novels more than I liked this one. Rucka is a good writer—a very visual writer, which is important in a comic-book story. However, I liked his own creations better because it sometimes felt, in No Man’s Land, that his creativity was somewhat restrained because the story existed already in another format.

And the last thing I can compare it to is the Gotham Season 5 story arc that it inspired. Perhaps not surprising if you know anything about my love-hate relationship with the FOX television series, I liked the Rucka novelization much more than the final season of that ill-fated show. As with most things in the final two seasons, they mucked up this story as well.

In the novel, the city of Gotham has been devastated by a major earthquake. The US government decides to blow the bridges and declare the island a no-man’s land. The people still left in Gotham divide themselves into factions, fighting over territory and resources. All of the main Batman villains are represented and head up their own gangs. Commissioner Jim Gordon leads a gang formed of the remnants of the GCPD. Strangely, Batman is absent for most of the early action.

This absence is one of the reasons I had trouble getting into the story initially. He shows up, of course, but there is a rift between Batman and Gordon that seems, for a time, impossible to heal. We get other members of the extended Batman family as well. There’s Oracle in the clock tower, Batman’s “man in the chair,” who also happens to be the former Batgirl (which she gave up after Joker put her in a wheelchair) and Jim Gordon’s daughter. Nightwing, the original Robin, Dick Grayson. The Tim Drake Robin. The Huntress, who pretends to be Batgirl for a time before the role is assumed by the mute friend of Barbara Gordon, Cassandra. And, it almost goes without saying, Alfred Pennyworth and Lucius Fox.

The meat of the story is a post-apocalyptic survival tale. Gang violence and squabbling over territory. Dealing with shortages in supplies and ammunition. Other than inserting Batman characters into the mix, the story doesn’t come across as anything very original. I don’t know, maybe it seemed more original in 2000, but it doesn’t today.

In addition, and this is a minor quibble, Rucka’s version of Joker and Harley Quinn never seem quite right to me. Again, maybe this was less obvious 20 years ago. Harley Quinn was still newly minted at the time. And Joker is, above all else, mercurial and wholly unpredictable. I find the sections about the GCPD cops to be more compelling and, for lack of a better word, realistic. I enjoy learning more about Renee Montoya and Harvey Bullock and Sarah Essen. The inclusion of “normal” humans keeps the story somewhat grounded.

After whistling past the unlikely premise of the story, the rest of the various plotlines don’t seem so far-fetched until Lex Luthor arrives with a nefarious plan to save Gotham and reap the benefits of ending No Man’s Land for LexCorp. Lex is also accompanied by Mercy Graves, who’s always fun, and Bane is brought on-board briefly, seemingly for a single action setpiece. Lex never feels like he belongs in a non-Superman story, in my opinion. Otherwise, he was written well, and it’s fitting that his plans are foiled more by Bruce Wayne than by Batman.

In the end, Batman: No Man’s Land is an okay story told well. Sadly, for such a cataclysmic event, it doesn’t feel like an essential story in the Batman mythos. Not in the same way that Knightfall and The Killing Joke—or even The Court of Owls—do. Considering most of the city has to be rebuilt after this story ends, I expected something a bit more substantial.

Nothing to be ashamed of, but nothing to write home about either. You can safely give this one a pass. If you’re a Batman completist, however, you’ll find plenty to enjoy between the covers.