This post, at its heart, is an essay about developing ideas for writing projects.

I’m no stranger to having ideas. Ideas are cheap. The implication that a good idea is all you need to write any work of fiction, from a short story to a multi-volumed series of books, is somewhat insulting. Especially to professional writers—which I am not.

Writing is what I do for fun. For me, it’s the adult equivalent of playing in the dirt with plastic army men.

Writers—and, by “writers” I mean “real writers,” not me—get asked the question “Where do you get your ideas?” so frequently that many have resorted to the Al Jaffee’s Snappy Answers to Stupid Questions approach in their responses. The late Harlan Ellison seriously addressed this question on a few occasions, but was also known to say, “There’s a swell idea service in Schenectady. Every week I send them twenty-five bucks, and every week they send me a fresh six-pack of ideas.” I’ve also read the quote with Poughkeepsie as the location of the idea service, but maybe Harlan was just trying to keep the real location a secret.

Personally, I can read one magazine—any magazine, Sports Illustrated, Skeptic, even Good Housekeeping—and come away with a hundred ideas for a piece of fiction or a blog post. I’m not bragging here. Most of the ideas are garbage. I’ll forget them before my layover in Denver if I don’t write them down. Here’s the kicker: I never write them down. They tumble ass-over-teakettle down a long greased chute to a giant, ugly Idea Heap in my brain. I have to trust that if the idea is a good-enough one, it will continually rise to the top of the heap, where I will see it occasionally when I take a peek.

If I find my thoughts returning to an idea several times—-arbitrarily, I’ll say five times—I may put something about the idea in writing. For instance, the idea for this post has been on my “Looking Forward” list for months now, as the cryptic note: “Write About Sketching and Fred Saberhagen.” As I am typing this, there are ideas for 23 other writing projects on this list. This is constantly changing. I’ll add persistent ideas occasionally. I’ll also retire the ideas that I always seem to skip over in favor of something newer and shinier. Nothing is carved in stone.

I’ve turned the idea over and over in my mind, approaching it from many different angles. I’m sure I’ve gone through the entire cubing process of one-man brainstorming. As usual, however, I get stuck on the “Associate” side of the cube. After much thought, in-between thinking about other things, I’ve discovered that I associate the process of building ideas with several different other creative processes.

My first association was with the late comic-book artist John Buscema. Known affectionately as “Big John,” Buscema was the artist who illustrated the book How to Draw Comics the Marvel Way. Buscema is listed as co-author with Stan Lee on the book, which was first published in 1978 and has been in print ever since. It is a great book for aspiring comic book artists, which I was in 1978, although I suspect many “real” artists might find its approach to be a little basic.

What I recalled from the book (which I no longer possess, for reasons that elude me), was a section in which Big John demonstrates how he scribbled stick figures as if sculpting a superhero out of pencil lead. This was after showing how to draw dynamic action figures using various geometric shapes and proportions. It was an artistic shortcut to the same basic process. Buscema just had those basic circles, spheres, ovals, cones, rectangles and squares hardwired into his brain, and was able to turn messy scribbles into a solid-looking finished Conan the Barbarian or Thor.

I’ve been able to find dozens of pages from the book as computer images, but not this particular page. It exists. You just have to take my word for it.

Of course, I also associated this process with my limited experience using modelling clay in high school Art class. Using a basic wire shape, then adding messy handfuls of clay and working it with fingers and tools until it resembled something else. Buscema was doing the same thing. His wire frames were pencil-sketched swoops that he scribbled various anatomical shapes upon until he arrived at a finished figure.

That’s a pretty good analogy for building ideas in fiction. Whether you’re a plotter or a pantser, everything begins with an idea. The idea is like the basic framework, the graphite swoop or wire skeleton. Maybe not even the entire framework. The idea may be a single swoop or just the central column or spine, to which you’ll attach limbs and muscles and defined features. Give ten different writers the same idea, and you’ll get ten different creative works in return. Ideas, as I said before, are cheap.

The author Peter Straub once admitted that he used his friend Stephen King’s vampire novel ‘Salem’s Lot as a structural template for his wonderful novel Ghost Story (the movie is not good, even though it’s where I first saw Alice Krige). I didn’t pick up on that when I read the Straub book, but it seems pretty obvious to me now. The novel isn’t a work of plagiarism. Each writer did their own thing, finding a different approach to climbing the same tree.

I know. I know. My metaphors are all over the place. Skeletons, frameworks, trees. You get the point, though.

Still, this particular writing project idea wouldn’t have gelled for me if I hadn’t remembered something else I read. It was a piece about the writing process of science-fiction author Fred Saberhagen. I think it was written by his wife, Joan Saberhagen, after he died from cancer. I could be wrong about that, because I can no longer find the piece on-line. Like the missing John Buscema page, you’ll just have to trust me.

It occurs to me now that a subtitle to this post might be “Things that Inspired Me to Write about Idea Building that I Can’t Prove Existed.”

What I remember is that Saberhagen would first tell the story to himself, essentially plotting a novel on paper using simple sentences. Sometimes this rough, rough outline might include dialogue and description, whatever the muse would dictate as Saberhagen “told” the story, but the important thing was to push through until arriving at an ending. This crude road map (there’s another metaphor for ya) would then serve as the frame of the story. It gave him an idea of the shape of the story. It also revealed the areas where the story was lacking in depth, perhaps sections in need of a sub- or side-plot, or more action. Saberhagen would go back and flesh these sections out, like an artist adding more scribbles or clay to the frame, or defining the shapes into a more finished form. The more he revisited the basic structure, the more finished the work became.

What I remember thinking about this process when I read about it was that Saberhagen seemed to be in touch with his personal creative process. When I compared this process to the Buscema scribble-sculpting one, I could see how similar they were.

My process is not so different. I get the most excited about two seemingly different ideas coming together in a common cause. I once wrote a history essay that somehow drew parallels between the legendary invention of baseball by Abner Doubleday (spoiler: he didn’t invent the game) and the lack of a single “cause” of the American Civil War (again, spoiler: slavery was most likely not even the main issue). The idea gelled for me then because I discovered that Doubleday was actually on Fort Sumter when the first shots of the Civil War were fired, and I read a quote somewhere about the Civil War representing the creation of the United States after too many years of political compromise. Prior to the war, according to the quote, the United States was a plural noun; after the war, it became a singular one. This confluence of ideas was my inspiration.

This post was inspired by thoughts of comic book artists, modeling clay, and Fred Saberhagen.

I don’t care where you get your ideas. Tell me how you build them. 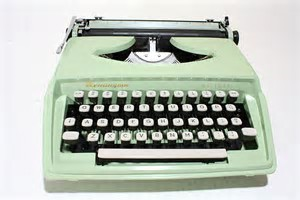