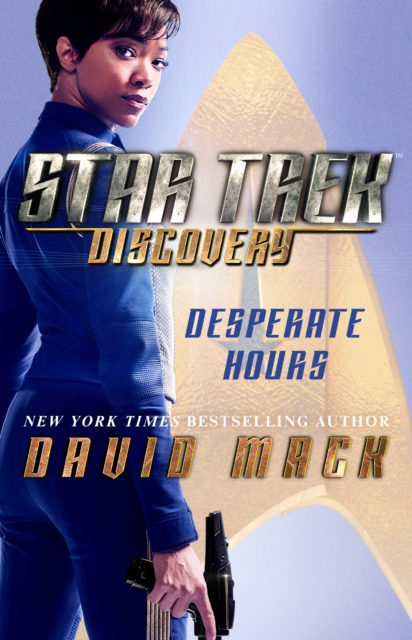 Star Trek: Discovery: Desperate Hours, by David Mack, was the first original novel for the television series. It was published in September 2017, the same month the series premiered on the CBS All Access streaming platform.

I purchased this novel, and three other Star Trek: DSC novels, for my Kindle Fire before taking a recent cruise. They were a good deal. Something like $1.99 each. I couldn’t resist. I’ve read other Trek novels before, based on TOS, TNG and even DS9. No Enterprise novels (yet) and, until this one, no DSC as well. If you’re a part of any particular fandom, you also get enjoyment from experiencing alternate media of whatever it is you’re into, including novels, comic books, even cartoons. As a nearly lifelong Trekkie, I take some measure of enjoyment from reading media tie-ins.

Not equal enjoyment from everything, of course. As a fan of the source material, you’re always hyper-critical and attuned to false notes or weak characterization. Fans are the worst.

I always try to dial down that critical part of my brain when reading fiction based on a favorite series. I don’t always succeed; but, I try. For instance, I’ve read the two first media tie-in novels in the Supernatural series (and am currently reading the third), and I’m very sensitive to the Winchester brothers acting out-of-character. However, I’d feel the same way going back to watch the episodes of the first season as well. I’ve had a similar experience in the Trek world.

On one hand, I wish I had read this prior to watching the first season of the series. It would have given me more backstory important in understanding Burnham’s character, who I didn’t initially like much. Plus, I would have better understood where I was in the Trek timeline. And I would have already been a fan of Captain Philippa Georgiou before the show began.

I also would have already had that link to Captain Christopher Pike and Spock.

Where is it? Oh, there it is! The other hand.

On the other hand, however, I’m glad I didn’t read this until after Season 2. The reunion of Burnham with Spock was a big part of that season, as is Capt. Pike’s taking command of Discovery. Reading this novel first would have robbed me of some of that first-time feeling I had while watching the series. As a bonus, I now have the actors from the series as mental templates for the characters in the novel.

Desperate Hours is a prequel novel, taking place prior to the events of the first season of the television series. This means there’s no Tyler or Voq, no Lorca, Tilly, Stamets or Jett Reno (a wonderful Season 2 addition). Also no USS Discovery, now that you mention it.

But, we do get to spend some time with Captain Philippa Georgiou—the “real” one, not the Mirror Universe version. Plus, there’s Saru, and then Capt. Pike and Spock.

The premise is straightforward Trek. An ancient alien spaceship, nicknamed the Juggernaut, surfaces from Sirsa III’s uncharted seas, destroying a drilling platform in the process. Meanwhile, aboard the starship USS Shenzhou, Lt. Michael Burnham is promoted to acting first officer ahead of science officer Saru, her chief rival, who will now serve as second officer. The captain tells Burnham that she has to prove that she deserves to get the job. As we already know from the series now, Burnham is a human woman raised and educated among Vulcans. So, she’s not the most personable of characters out there.

The Shenzhou must respond to the distress call from the colony on Sirsa III. The Juggernaut is attacking the colony. Like the Borg from TNG, the alien starship seems to learn and adapt from its failures. It’s going to succeed at wiping out the colonists if no one intervenes.

Starfleet intervention was never really in doubt. However, the USS Enterprise, under the command of Capt. Christopher Pike, is also ordered to head to Sirsa III. Pike’s orders are to destroy the Juggernaut, even if doing so means destroying the colony and all the inhabitants on the planet.

Georgiou objects to destroying the colony, of course, and is able to use some sort of seniority that I don’t fully understand (including how it can countermand Starfleet orders) to keep Pike from pulling the trigger too early. In all fairness, Pike doesn’t want to kill a lot of people either, even if it will save billions. He’s following orders, the way soldiers are supposed to.

This sets a dramatic clock ticking. Both the Shenzhou and the Enterprise, working together, have only so much time to eliminate the alien ship as a threat before they have to carry out Starfleet’s mass destruction order.

To raise the stakes, Michael Burnham and Spock, the science officer on the Enterprise, hatch a scheme to board the alien vessel and attempt to deactivate it. Spock is Burnham’s “brother,” whose birth parents were her foster parents, but they have no relationship whatsoever within the covers of this novel. They must overcome their personal issues with each other to pass a series of tests presented by the automated ship. Part of the solution to their dilemma turns out to be Spock performing a mind meld with Burnham.

I’ll leave you to guess how everything turns out. Part of the book’s conflict is external, which is the threat the Juggernaut poses to the colony, eventually to the Federation starships, and—presumably—ultimately to the entire galaxy. The internal conflict is all of the psychological snares and pitfalls of Burnham and Spock. Each character, in their typically unemotional Vulcan-trained way, was jealous of the other’s relationship with Sarek. Through the mind-meld and their shared experience within the Juggernaut, the two gain more mutual understanding and respect.

I enjoyed this novel. I could see it as an entertaining and exciting episode of the series, in fact. I do feel that the narrative slowed considerably once Burnham and Spock were inside the Juggernaut, and this sequence seems to go on much longer than necessary. I’m not accusing the author of padding for word count. That may be what happened, but I don’t know that. What I do know is that this testing phase seemed to go on for a lot more pages than it needed to in order to get the point across. It is, however, not a deal-breaker.

This one is more current than most of what I review here. Only about two-and-a-half years old, at this point.

An interesting plot, familiar characters and Trek set dressing. You may not remember this story forever, but it will pass the time in a pleasant way.